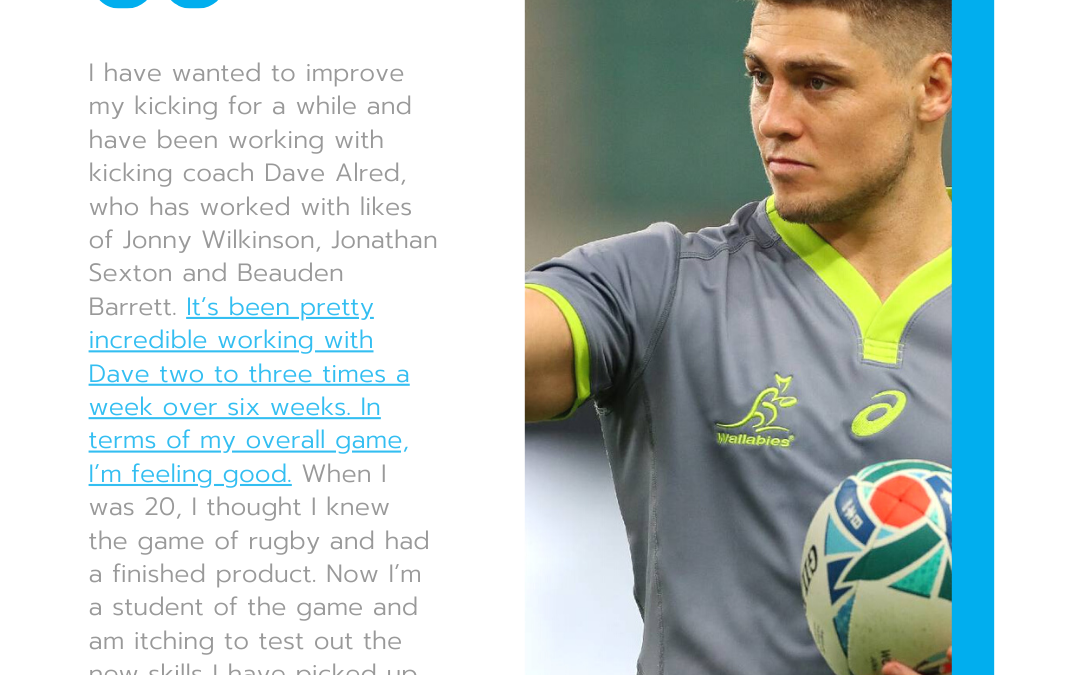 Wallabies star James O’Connor has been working with School of Kicking’s Dave Alred during the lockdown to take his kicking to the next level.

To get access to exclusive video webinars and world class coaching – sign up to our Kicking for Lockdown Course.

Listen to the audio version on Soundcloud.

Dr Dave Alred MBE is well known for his expertise in performance coaching and has over thirty years of experience mentoring kickers towards the very peak of their game.

O’Connor explains: “I have wanted to improve my kicking for a while and have been working with kicking coach Dave Alred, who has worked with the likes of Jonny Wilkinson, Jonathan Sexton and Beauden Barrett. It’s been pretty incredible working with Dave two to three times a week over six weeks.”

The versatile Wallaby also spent some time overseas with London Irish and French giants Toulon before moving back to Australia to reignite his Super Rugby career.

During his international career he racked up 223 points for Australia including 14 tries, 39 conversions and 25 penalty kicks.

O’Connor, now 29 reflects on his earlier years: “When I was 20, I thought I knew the game of rugby and had a finished product. Now I’m a student of the game and am itching to test out the new skills I have picked up.”

Sign up to the School of Kicking Virtual Classroom to receive exclusive access to the same expert level of coaching as James O’Connor where you can check out our FREE ‘Drop Punt Course’ and our ‘Kicking in Lockdown Course’ for only £9.99.