Exeter Chiefs stalwart Gareth Steenson has risen to the top of the Gallagher Premiership Rugby kicker leaderboard as the league’s Most Valuable Kicker.

Steenson was number one as of round 13 on March 8, 2020 when the competition ground to a halt due to the covid-19 lockdown.

The Irish fly-half’s impressive kicking percentage of 96.7%, missing just one of his total 30 kicking attempts, is just one of the metrics used by goalkickers.co.za to find the Most Valuable Kicker.

Sports analytics site Goalkickers, endorsed by Gilbert Rugby, determines the best rugby goalkicker based on success percentage and kick difficulty, along with a new metric called Value Added. Value Added indicates the value added on the scoreboard by a particular goal kicker relative to other professional kickers. It is the number of points the kicker scored more than expected given the difficulty of the kicks. The higher the kickers’ Value Added score, the better their performance. 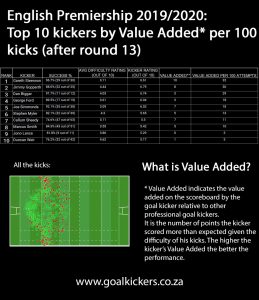 Goalkickers also creates a heat map for each kicker to determine where on the pitch each kick is taken, showing Steenson’s only missed attempt was to the far left of the goalposts by the sideline. In total, Steenson has scored 65 points for his team, attempting 23 conversions and 7 penalties.

Steenson also achieved the second longest kicking streak, with 17 successful kicks in a row, behind the longest streak of 18 from fellow Exeter Chiefs player Joe Simmonds.

Steenson again scored in the top two for the most perfect games, without a single missed shot at goal, with four perfect games behind Harlequins’ Marcus Smith who managed five perfect games.

When the Gallagher Premiership resumes in August, Exeter will be hoping Steenson’s winning ways continue helping the side to stay at the top of the table ahead of Sale Sharks and Bristol Bears.

To see more kicking statistics and to compare kickers across the Gallagher Premiership go to goalkickers.co.za