Despite the ‘Top 14’ 2019/20 season being declared null and void due to the global outbreak of Coronavirus, it was Clermont Auvergne kicker and captain Morgan Parra who took the Most Valuable Kicker’ (MVK) award for the season.

The MVK is calculated by a variety of metrics developed by Sports analyst website http://goalkickers.co.za including kick difficulty, length of successful kicking streaks and perhaps most importantly, ‘Value Added’ to the scoreboard.

A kickers ‘Value Added’ score denominates the literal value that they have added on to the scoreboard for their team, with the number of points they scored relative to the difficulty of their kicks being calculated.

This can also be expanded upon as ‘Value Added per 100 kicks’. This is a particularly beneficial metric to use in regards to the season cancellation as we can make statistical based predictions towards who would continue to be the most productive and valuable kicker throughout the remaining match-days based on form and consistency, with Parra being the front runner in both Value Added categories.

From the 8 conversions and 18 penalties Parra took up until the season’s cancellation, the French International scored 65 points with a success rate of 92.3%. 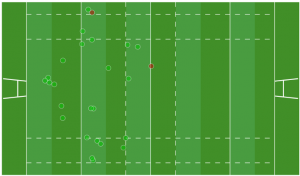 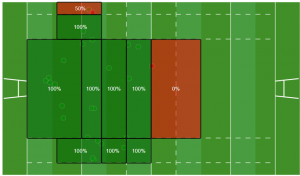 Goalkickers calculate that based on the difficulty of these kicks an average pro kicker would have scored 54 points, meaning Parra’s Value Added score was 11.

Evaluating Parra’s Value Added score per 100 kicks, his value added score rise to 43 points closely followed by La Rochelle kicker Brock James on 41 but with a comfortable gap to the rest of the kicking field.

Despite James having a higher success rate from his kick’s than Parra, these were taken from slightly less difficult areas of the field, therefore allowing Parra to develop a higher value added score.

Parra’s consistency in being able to build the largest value added score is also reflected in his ability to make the most successful kicking streaks, being the only player to kick over 20 successful kicks in a row.

To see more kicking statistics and to compare kickers across the world of rugby go to http://goalkickers.co.za