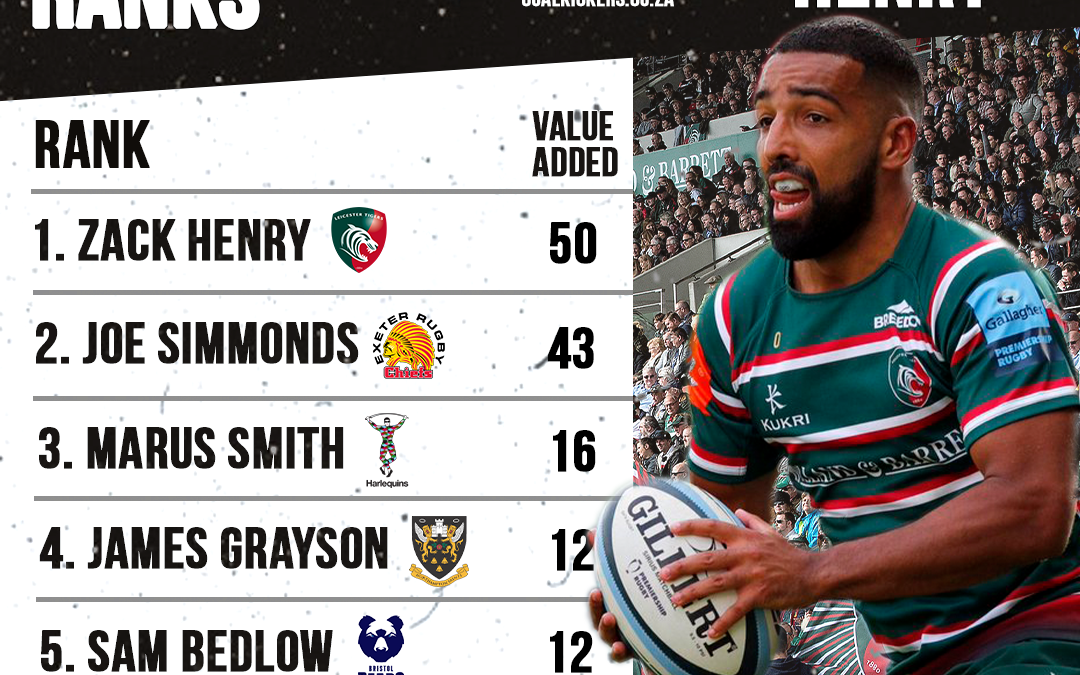 Round 3 of the Gallagher premiership saw Leicester Tigers fly half Zack Henry take the top spot for the competition’s most valuable kicker. Despite the Tigers falling to a defeat by the Exeter chiefs this weekend, Henry achieved a 90% kicking success rate, kicking 9 out of 10 goals after the opening 3 rounds. This however was beaten by last weeks winner, Joe Simmonds from Exeter who achieved a slightly higher success rate of 91.7%.

Sports analytics site goalkickers.co.za calculate that Zack Henry had an average kick difficulty of 5.0. Whereas, his 2nd placed rival Simmonds had an average kick difficulty of 5.5.
Despite results swinging the Chief’s way, Zack Henry finished on top of the pile through having the highest “Value added per 100 kicks” with a score of +50. Second placed Joe Simmonds totalled a score of =43 and Harlequins’ fly half Marcus Smith got third place with +16.
The Value Added score is an indicator to show the added value on to the scoreboard by a kicker compared to their kicking rivals. Calculating the number of points the kicker scored more than they were expected to when taking into account the difficulty of their kicks.
The Gallagher premiership continues right the way through the festive period, and with the Exeter Chiefs still the ones to catch, the other rival teams will be more than determined to try and knock the current champions off the top spot.
To see more kicking statistics and to compare kickers across all Rugby Competitions worldwide go to goalkickers.co.za.