At the School of Kicking we want to celebrate kicking success and share it with everyone as a source of inspiration and motivation. So we’re really proud to introduce you to our graduates.

These people have worked with the School of Kicking to become the best in the game and continue to do so.

The following players are a selection of those who have benefited from the coaching philosophy which we offer at School of Kicking. School of Kicking is the only place where you find coaches delivering these principles fully up to date and delivered under the guidance of Dr Dave Alred. 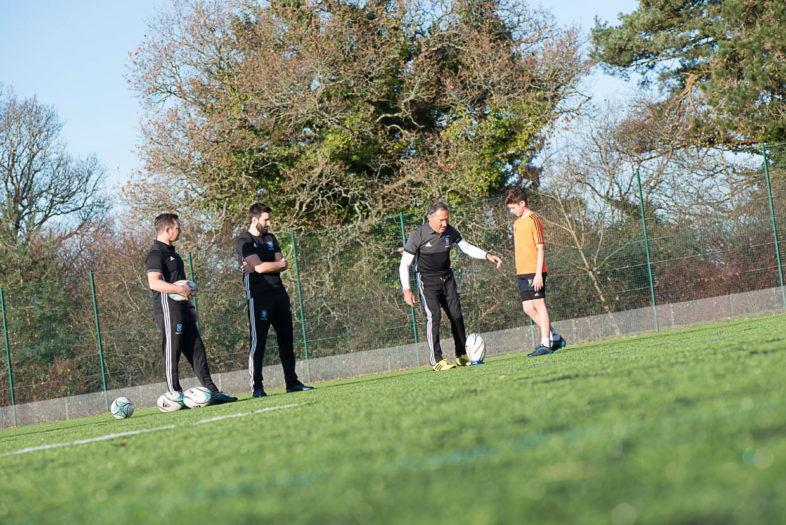 Every school has standards and ours is no different. To graduate from a specific kicking technique, we want you to send us a video that you are happy with. One that you can be proud of. We don’t demand perfection because that is subject to individual preference and bias. We want you to show us the result of your hard work and the journey you have been on, because we are all different and success is whatever you determine it to be.

Please record the video in landscape mode as it makes for a much more enjoyable viewing experience for your adorning fans (i.e. us and everyone who takes inspiration from you)!

Also please send us a little message about how it feels to work your way towards being the best in the game.

From the very top of the game, to the grass roots level. Our coaches have seen development, progress and results at every level. Here are just some of the many number of people we have worked with and helped improve.

“Their mix of calm explanations with interactive practical sessions kept everybody enthralled for three hours.”
PARENT
“Dave challenged me to break apart my whole kicking game and rebuild from scratch. Never easy for the ego to accept change, but it was a pleasure to be mentally challenged in this way. I now at least understand what it takes to be a world class kicker, although there is an ongoing commitment to consistency that I need to meet. No wonder Jonny Wilkinson achieved what he did in the game with this approach! Thank you Dave”
JAMES O'CONNOR

“Dave didn’t tell me what to do he told me how to do it and then showed me, the sound, the flight, the power, it was as though he was kicking a different ball. It was already clear this is a truly special guy, and if I am serious about wanting to succeed I need to learn from him everything I possibly can.”
JONNY WILKINSON

“Straight away Tony picked up what my problems were and showed me exactly what I needed to do to eradicate them.”
DAN MUGFORD

“Kicking with Tony never fails to challenge me, I always leave with real excitement about what I’ve learnt or how I improved my technique. School of Kicking has massively helped me focus on the process, meaning less frustration when things aren’t perfect and developing an understanding that there’s a big difference between just kicking it as hard as I can vs connecting well with the sweet spot. Sessions with Tony always give me confidence in my kicking and make me really excited for my next game to be able to put it into practice.”
CAITY MATTINSON

“Having worked with Stu and Yappy for the last two years, I have seen dramatic improvements in both my kicking performance and my overall appreciation for the advantages that a strong kicking game can have on a team’s performance. Their knowledge, communication and emphasis on preparation, has allowed me to develop a secure process that I have been able to rely on, and repeat, when standing over high pressure kicks.”
TED LANDRAY

“Kicking has always been an area of the game that I’ve wanted to study, master and perfect. I’m a massive believer in the belief that ‘in order to be the best you need to be coached by the best’ and I’m fortunate enough to have had that here at the School of Kicking. It’s no secret that kicking is very much dominant in the men’s game but this is also something that I’d like to see evolve in both the women’s and girls game. It’s a great skill to have and provides a good opportunity for young ambitious girls to get stuck in”
LAGI TUIMA

“I couldn’t recommend Stu highly enough, I found he had excellent technical knowledge and I improved my kicking immensely under his guidance. His sessions are fun, challenging and engaging. My only regret is that I didn’t get to work with Stu from a younger age!”
WILL CHUDLEY

“Having worked with Stu and Yappy for the last two years, I have seen dramatic improvements in both my kicking performance and my overall appreciation for the advantages that a strong kicking game can have on a team’s performance. Their knowledge, communication and emphasis on preparation, has allowed me to develop a secure process that I have been able to rely on, and repeat, when standing over high pressure kicks.”
TED LANDRAY

“As a rugby coach, I found the workshop fascinating. The detail the coaches go into and their understanding of kicking is second to none.”
YOUTH COACH
“School of Kicking has been the building blocks of my kicking career. The driving point of this has been the one-on-ones which have allowed me to develop my kicking through a competitive, informative and enjoyable environment. Cannot thank them enough.”
LILLY STOEGER-GODDARD

Get Started
Get 10% off School of Kicking!
Subscribe now to get free discount coupon code off any clothing or equipment on our website. Including kicking nets and balls! Don't miss out!
SUBSCRIBE
I agree to sign up to the School of Kicking exclusive offers and tips email list.
We will never spam you, unsubscribe anytime.